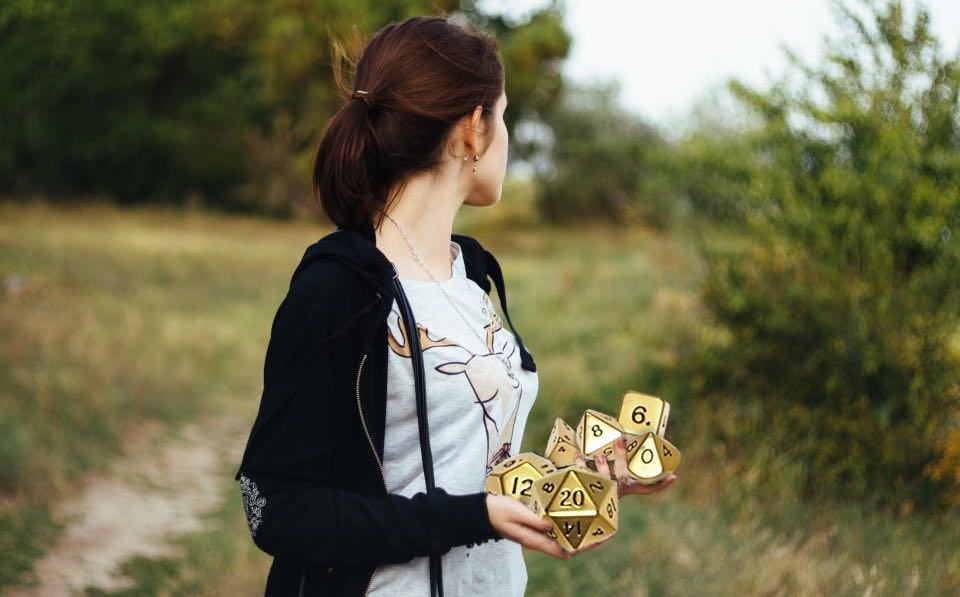 If you understand your genre, characters, and moods, you should have an idea of what kind of game play will be best for your game. Is it gritty and realistic, requiring lots of intricate rules to simulate physics?  Is it an epic game where superhuman powers matter more than mundane skills? How easy or difficult will it be for characters to die?

An important piece of game play in RPGs is chance and uncertainty.  It’s not the only part of game play—there’s also player collaboration, setting, plot, dialogue, etc.  However, chance is the unique piece that makes roleplaying games, well, games.  Without the element of chance, RPGs become a sort of improv reader’s theatre.  Chance creates the game by requiring players to strategize.  The chance of failure encourages characters to think through which actions will be most effective in a certain context.  Higher and lower chances of success at particular tasks differentiates characters, giving players unique abilities to contribute and the need to cooperate.  Characters chance failures can force players to re-evaluate their strategies and try something new.  Even the failures of non-player characters can force the game master to improvise in ways that create memorable victories for players and make the game more exciting.

The RPG design question at this point is how do manage chance in your game? How will chance make the game challenging and exciting for the players, and will that chance lead to the kind of outcomes you’d expect for your RPGs genre? You’ll want to be very careful how you calibrate chance.  Too much chance of failure, and the game ends early in frustration and/or character death.  Too little chance of failure, and the game is less challenging and less exciting.

The classic way to introduce chance is to roll dice, and there are many variants of how to use dice in an RPG.  Here are a few common approaches to using dice:

Really, any of the above (and many models not discussed) can be calibrated to challenge players and create characters that are good at some things a less good at others.  Some good resources for using dice to create chance in an RPG: an in depth discussion of dice mechanics and an online dice probability calculator.

Of course, dice aren’t the only way to make roleplaying games chancy or challenging.  Here are some other common ways to introduce chance in a game:

There are even more creative methods.  Dice poker.  Games of physical skill.  But here are a few questions that might help you tune your use of chance:

While you experimenting with different types of chance, you can judge them by

In Legendary RPG, here are just a few of the game mechanics decisions we made:

If you’re curious about Legendary’s game mechanics, sign up for our email list to have chances to play test it yourself!